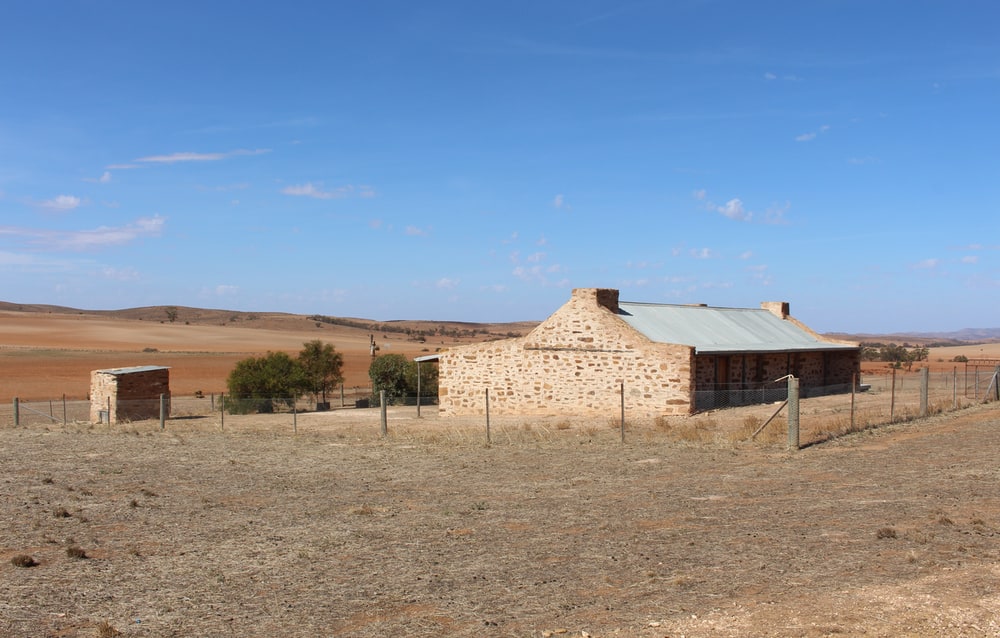 The Wilkins Homestead, where Sir Hubert Wilkins was born, nestles in the bare and gently rolling hills east of Mount Bryan, 200 kilometres north of Adelaide, South Australia. His parents called the homestead Netfield, because it was one of the first farms in the area to fence the fields with wire. After he commenced his travels in 1909, Sir Hubert only visited the homestead on a few occasions, but it was always a special place to him. And he regularly wrote about it, or talked about it. For example, in February 1915, when he was sitting in a snow house he had built in the Arctic, Sir Hubert wrote to his parents:
“I often think of you at home and of brothers and sisters and trust that all are well and happy. What a pleasure it will be to see you all again. I have dreamed these last three nights about ‘Netfield’ our old home. It is surprising how little one worries of the daily happenings of the world when away from civilisation. Were I there I would be as much interested as anyone in what was happening in England, America or the Continent, but up here we seem to have a little world of our own, and see the memories of our friends and relations are something distinct and separate.”

The earliest photograph I have been able to find of the Wilkins Homestead, shows the house abandoned, but the stone walls complete and the roof intact. That suggests the photograph was taken by Wilkins, on one of his visits to South Australia, in the 1920s.

In 1939, Hubert visited the Wilkins Homestead and recorded moving footage of it. He also filmed the Mount Bryan East School, and next to it, the Methodist Church. George Hubert had attended both, and today, both of those buildings are still standing. Wilkins’ 1939 film of the Wilkins Homestead shows how much it had deteriorated in less that 20 years. There is no roof, and the walls have partly collapsed. It was a common practice to simply take building materials from abandoned homes, especially during the Depression, and this may have been the fate of the original Wilkins Homestead.

I first visited the remains of the original Wilkins Homestead in 1997. There was even less remaining than when Sir Hubert Wilkins had filmed it, almost 60 years earlier. The reason for my first visit was to attend a special event, and hear Dick Smith announce his support for the Wilkins Homestead restoration project. Dick Smith, and other people, spoke about Sir Hubert Wilkins and the importance of making this forgotten Australian more widely known in his own country. The complete restoration of the Wilkins Homestead was successfully undertaken, and it was opened to the public in 2001.

To my mind, the Wilkins Homestead, and the remains of nearby church and school building, are the most significant Australian cultural sites relating to Sir Hubert, because they are some of the few tangible links to him in this country. After his death, some of his material was destroyed, and much of the remainder was scattered or sold, most of it in America. Fortunately, the majority of his personal records are held at the Byrd Polar and Climate Research Center, at the Ohio State University. Other material that is not held at the Ohio State University, is often held in private collections. But there is very little in Australia, and what there is, such as the Southern Cross aeroplane Wilkins sold Sir Charles Kingsford Smith, or his photographs of the Anzacs at the Western Front, are carefully preserved, but with little or no mention of Sir Hubert Wilkins. Thankfully however, there is the Wilkins Homestead.

Many people, myself included, have discussed the concept of ‘bringing Wilkins home’. That is, somehow bringing his memory home to Australia, so that he holds a more prominent position in the Australian consciousness. One way this can happen is by bringing Sir Hubert Wilkins’ story home, or raising public consciousness of him. Recent books have begun to do this, but unfortunately the story they promote is the myth of the fearless adventurer. They focus on Sir Hubert’s daring exploits, saying that he was on a quest to help humanity. That’s a story that Wilkins concocted, but it wasn’t entirely true.

With The Illustrated Sir Hubert Wilkins, which is my fourth book based on my Wilkins research, I wanted to do a number of things differently. Firstly, I wanted to show the remarkable photography of Sir Hubert. He was unique among explorers because he was also a trained professional photographer, and he always carried a camera. Many of his photographs, which have never been seen before, are stunning.

In The Illustrated Sir Hubert Wilkins, I also wanted show the things that people would never get a chance to see. Personal items that were carried by Sir Hubert, and were obviously important to him. Or historic items that he collected and kept. Also, once he started travelling, Wilkins missed his home and family greatly, and he would constantly carry reminders of Australia. Many of these personal items are still in private collections, but I was able to photograph them for the book.

Another aim of mine with The Illustrated Sir Hubert Wilkins, was to look beyond the myth of Sir Hubert as the restless adventurer, constantly going from one expedition to the next. Wilkins, as I came to understand him, was a deeply conflicted person. In some ways, the seeds of that conflict were planted at the Wilkins Homestead, and followed by the tragic events that took place in Adelaide in 1908. Those events led him to argue with his parents, and caused him to run away from home and never see his father again.

When I, and the other people involved, established the boutique publishing company to produce the limited edition The Illustrated Sir Hubert Wilkins, we decided at the outset the name of the publishing company should be Netfield. It would, we felt, in a small way, reunite Sir Hubert Wilkins with the place he always called home, the Wilkins Homestead.