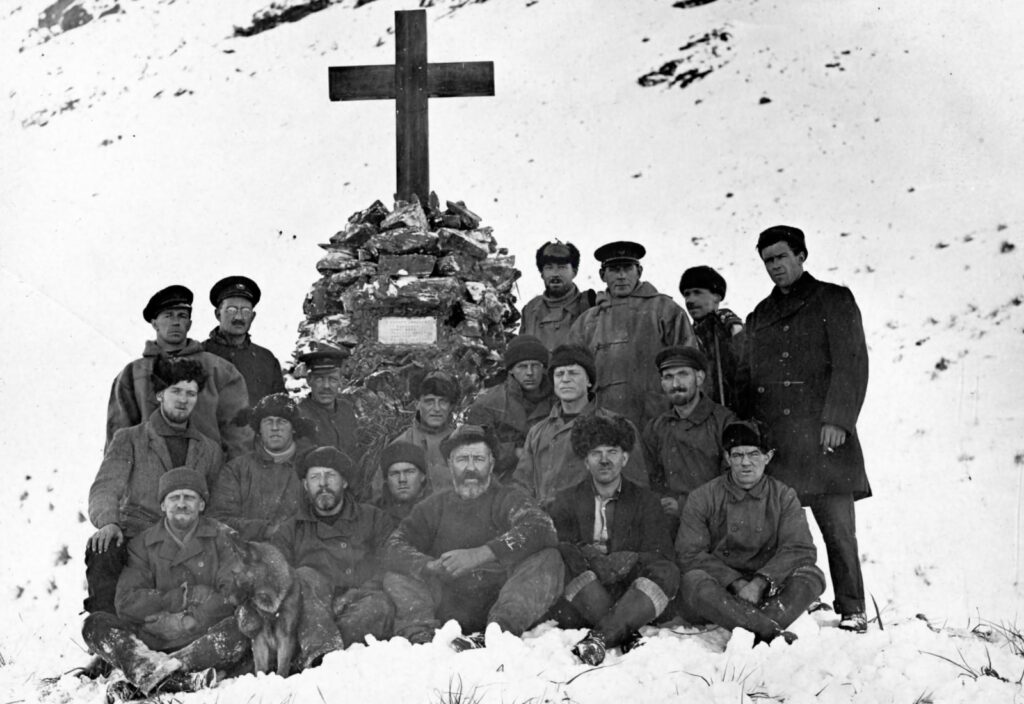 A century ago, on 5 January 1922, the man regarded by many as the greatest polar explorer of the Heroic Age, died aboard his ship Quest, at South Georgia, an island in the South Atlantic Ocean. Shackleton’s death brought to a close the Heroic Age of Polar Exploration, made famous by explorers such as Robert Falcon Scott and Roald Amundsen.

Sailing on the Quest with Shackleton was Australian explorer, George Hubert Wilkins (later Sir Hubert). Wilkins kept detailed notes and observations of Shackleton throughout the voyage of the Quest because he wanted to study Shackleton’s leadership style, so he could take his own expedition to Antarctica.

Wilkins’ record of the voyage, and his observations of Shackleton, along with his letters to his mother and hundreds of photographs, joined the rest of Sir Hubert Wilkins’ lifetime collection at the time of death. I was fortunate in gaining exclusive access to these records for The Illustrated Sir Hubert Wilkins. Many of the documents are still privately held, and have never been published.

In one of his notebooks, Wilkins makes mention of meeting Frank Wild, Shackleton’s second-in-command, in London shortly before the Quest sailed. Wilkins writes, “Caught 9.30 train Southampton. Met Wild at Station. Wild borrowed money from someone whom he was talking to, which does not look good”.

From the very start, the expedition was underfunded, and Wilkins continually commented on it. He also noticed that many of the men were more interested in drinking than in scientific research. Another privately held document is a fifty-page draft report, written by Wilkins, in which he describes the voyage of the Quest. The report was originally intended for the British Museum (Natural History), but Wilkins could not help slipping in comments about the drinking among the crew. One comment was, “We collected samples of seawater night and day. We had expected to have on board a number of bottles for this, but as they failed to arrive I commandeered the beer bottles emptied from day to day and the supply was not inadequate.”

Wilkins also wrote to his Mother, commenting on Shackleton’s leadership style. “Dear mother. I am not very much impressed with Sir Ernest’s leadership. He is far less competent than Stefansson and not such a big-minded man. He cares only for newspaper notices and money. He is not interested in scientific work.”

The Quest limped out into the Atlantic Ocean on its way south, and it soon became apparent the ship was barely seaworthy. Wilkins wrote, “Shackleton must have been drinking and seeing double when he bought that boat. He said she would do nine knots, but the utmost she could do was four and a half. He must have been suffering when he organised this expedition, for it was nothing like the others”.

The Quest finally crossed the Atlantic and put into Rio de Janeiro. Wilkins wrote, “We staggered into Rio under sail, helped out by an occasional kick from the propeller. The keel is warped and buckled like a snake. It will take at least six weeks to straighten the keel and put the boat in seaworthy condition”.

Wilkins decided that to do any real scientific work for the British Museum, it would be best if he went on to South Georgia ahead of Shackleton. Two months later, Wilkins was at South Georgia, when he returned from collecting specimens to see the Quest had finally arrived. Wilkins noted, “A flag at half-mast as we entered the harbour had no special significance to me. I was in no way prepared for the shock that stunned me when a man told me that Shackleton was dead”.

Shackleton was buried in the whalers’ cemetery at South Georgia, and the Quest crew built a rock cairn, overlooking the harbour. Wilkins explained, “We quarried rocks out of the frozen soil with our hands to build his monument. Every one of us felt his death as a personal loss”.

Thirty years later, when Wilkins was knighted and known as Sir Hubert Wilkins, he was asked by one of Shackleton’s early biographers, Margery Fisher, to answer questions about his time aboard the Quest. Fisher asked him if Shackleton was sympathetic toward scientific research and Wilkins answered, “My understanding of Shackleton’s attitude on the Quest Expedition was that he was definitely not sympathetic towards scientific research”.

When asked about the general feeling on board, Wilkins answered, “It was obvious that the Quest Expedition was to be the Boss’s last great adventure. He had gathered about him many of the men who had served with him before; he would visit and pay respects to many of the cities where he had been honoured; it was to be a long, but not entirely selfish joy-ride”.

When asked about the general health of Shackleton, Wilkins answered, “Being a popular hero had taken its toll. The worry of financing the expedition and the manner in which it was done had left its effect. The worry over the condition of the ship; the many setbacks and the reaction of some of the crew who had returned to England sustained the strain under which Shackleton had been for some time. He was obviously tremendously weary when we reached Rio”.

By the time he came to answer the questions put to him by Margery Fisher, Wilkins himself was weary after a lifetime of financing his own expeditions. When Fisher asked him about Shackleton’s philosophy, Wilkins was perhaps commenting as much about himself as he was about Shackleton. He told Fisher, “To know Shackleton was to know that he was a poet. But as he often said, the necessities of maintaining a popular hero front, the distasteful methods of raising money, were burdens that suffocated all other ambitions”.

Previously unknown writings, along with previously unseen photographs from the Shackleton-Rowett Expedition will be published in The Illustrated Sir Hubert Wilkins, by Jeff Maynard, published by Netfield Publishing.