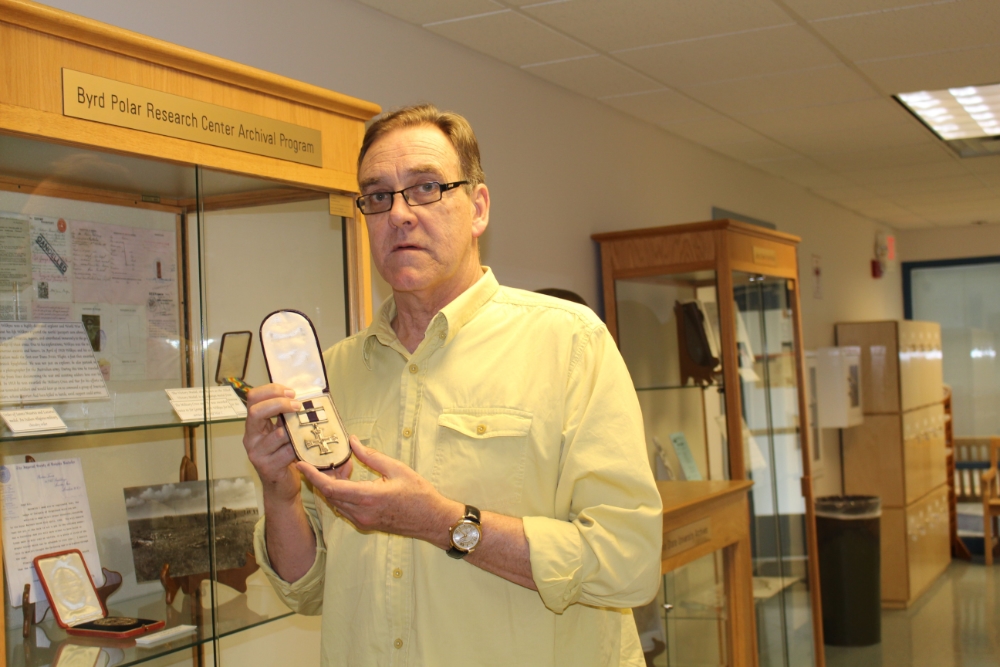 “The growing interest in Wilkins in recent years has been in no small part powered by the dedicated researchers finding ever more pieces of his extraordinary jigsaw puzzle and starting to put it all back together. My own favourite of the genre concerns the writer Jeff Maynard … there is something wonderfully moving about one of Wilkins’ own countrymen, 60 years after his death, journeying to the other side of the world to learn more about him, to pull that book down off the shelf in a dusty barn, and put one more piece of the scattered jigsaw puzzle in place.” Peter Fitzsimons, author of The Incredible Life of Hubert Wilkins.

Locating the lost records and artefacts of Sir Hubert Wilkins has taken me many years. And yes, I did find Sir Hubert Wilkins’ list of the photographs that he took in World War I in a dusty barn in America. It was an Amish barn actually, and fifteen boxes of Wilkins’ material had been stored in the barn by Mike Ross, the adopted son of Wilkins’ secretary Winston Ross. Mike was not Amish himself, and how he came to leave the documents of Wilkins’ time with Sir John Monash, Winston Churchill, Joseph Stalin, Charles Bean, Sir Ernest Shackleton, Charles Lindbergh, Amelia Earhart—and even Walt Disney and Mickey Mouse—in an Amish barn, and how I came to find it, is a story in itself.

In compiling this unique collection for The Illustrated Sir Hubert Wilkins, I have been fortunate to be assisted by many people who allowed me access to their material so that I could photograph it or make a record of it. The first place to visit for anyone interested in Sir Hubert Wilkins is the Polar Archives at Byrd Polar and Climate Research Center, Ohio State University, Columbus, Ohio. Throughout his life Sir Hubert Wilkins constantly wrote letters, as well as kept documents, photographs and artefacts. The collection at the Byrd Polar and Climate Research Center is enormous (over 150 cubic feet of material of documents alone) and I always tell anyone planning to go there that they should expect to spend at least a month if they hope to read even a section of the material. I want to thank Laura Kissel, the curator of the Polar Archives, who has been so helpful on all my visits. What I am also extremely grateful for is that the Byrd Polar and Climate Research Center agreed to photograph artefacts exclusively for The Illustrated Sir Hubert Wilkins. A special lightbox was acquired by the Polar Archive and Sir Hubert Wilkins’ medals, and many of his personal items were photographed. It was a real thrill to see the cups and jug from Sir Ernest Shackleton’s ship ‘Quest’, Sir Hubert Wilkins’ mention-in-despatches from World War I which was signed by Winston Churchill, his Anzac records from the Western Front and Gallipoli, items he carried on his flights in Antarctica and the Arctic, on the Graf Zeppelin and Hindenburg airships, and on the Nautilus submarine when he went under the Arctic ice in 1931.

I must also make a special mention of Paul Rodzianko and Bob Mayer, who helped so much when they made their personal collections available to me. Paul Rodzianko became involved in the Wilkins Memorial Foundation in 1980, when he visited Sir Hubert Wilkins’ farm in Pennsylvania. Paul now operates a winery in Georgia. He has been wonderfully helpful sharing correspondence and artefacts, particularly from Wilkins’ time with Sir Ernest Shackleton and the Quest expedition. Bob Mayer became interested in Sir Hubert Wilkins many years ago, when he read about the voyage of the Nautilus submarine and Sir Hubert Wilkins’ attempt to reach the North Pole in 1931. Bob began visiting areas that had been frequented by Sir Hubert Wilkins, and began collecting material he found for sale. In particular Bob Mayer collects press photographs, which in the 1920s and 1930s were manually printed and distributed to newspapers around the USA. Bob Mayer has a unique collection of Wilkins’ images and also worked closely with Paul Rodzianko to help preserve material when Paul returned to his native Georgia, after living for many years in the USA.

The late Doctor David Larson was also involved in the original Wilkins Memorial Foundation started by Wilkins’ secretary, Winston Ross. I visited him at his home in Washington DC, and he allowed me to copy hundreds of personal letters that Sir Hubert Wilkins had written to his wife, Suzanne. Larson told me how he came into possession of the letters, which Suzanne had wanted destroyed.

Many other wonderful people have contributed to The Illustrated Sir Hubert Wilkins. One story about which I was always intrigued, involved a beautiful young stowaway on one of Wilkins planes in 1926. I thought perhaps the story was another fabrication of Wilkins until I found correspondence between Wilkins and the young artist, Laddie Kyle. With more clues, I was able to contact Vicki Wisenbaugh, who curates a museum in the remote community of Tenakee Springs, Alaska, and through her get in touch with Laddie Kyle’s niece, Cindy Kile Thomas in Florida. Wilkins wrote affectionately of the pretty young artist and writer who attempted to stowaway in his plane in 1926. To eventually discover photographs of her, along with her artwork and poems, was just another of many exciting discoveries on the journey to produce The Illustrated Sir Hubert Wilkins.

Sir Hubert Wilkins’ great-niece Kaye Ridge and her son Andrew Ridge, Stephen Carthew of the modern Wilkins Foundation, my fellow Wilkins researcher Saskia Raevouri, and many others have also contributed to the unique collection in The Illustrated Sir Hubert Wilkins. Future blog posts will tell more about their contributions.